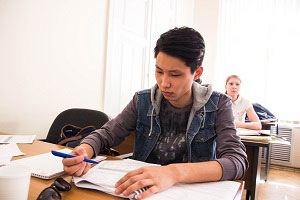 measures an academic English language proficiency of non-native speakers. The test is to be taken by those who whish to enter English-speaking institutes of higher education. The test is recognized by more than 8 500 colleges and universities (including the 100 top universities in the world) in more than 130 countries, inclusive of Canada, Great Britain, Australia and the USA. Not only persons interested in education abroad need to take the test, but also those who seek for an English-speaking job as well as your test scores may be required by such institutions as licensing bodies, government agencies, businesses and scholarship programs.

For the first time the idea of necessity of such a test was come up with a national council, which included the representatives of thirty government and private organizations. The test was initially developed at the Centre of Applied Linguistics under the guidance of Stanford University. The first “test-drive” was taken by the Modern Language Association in the USA in 1964. In the next year The College Board and ETS (Educational Testing Service) took a responsibility for a continuation for the TOEFL program. In 1973 the GRE board of advisers joint these two organizations. Now TOEFL is officially administered by ETS.

There are three forms of taking TOEFL tests: a paper-based test ((TOEFL pBT test), commuter-based (cBT) and internet based (TOEFL iBT). To the point, the latter one gradually replaced other types of test-taking. Nowadays TOEFL pBT is taken only in the regions with no Internet access.

You can find yourself the test structure in some prep-books or on the Internet. You can also practice with an online TOEFL test free. Moreover you have an opportunity to download some prep books, prep courses and any TOEFL practice test. The more so as it’s no trouble to do it so long as there are 4 500 test-sites in 165 countries worldwide.